So far I've run & played a total of two sessions for Tales of the 13th Age, and each one was pretty cool in their own right, and funny enough both were tied in to magic items.

I'll have to be honest about these sessions:


Alright, on with the game reports! :)

The first game involved Fariq Al-Quadim, half-human prince of the Brass City and his guide, Janneris Tamerikos.  In a series of pre-Tales games that happened weeks before Tales of the 13th Age [ToT13A] was even announced, they had acquired a staff that was stolen from the Golden Order, which (tying it to ToT13A) was revealed to be used for a ritual that would help bring down the Lich King's power.  Once the ritual was complete, it opened a portal to Roachdale, a cockroach-infested ruins where Jont Urner, a half-orc living dungeon delver who knew about the Necropolis, was last seen; apparently the staff was linked to him in some way.

After dealing with the cockroaches and the demons with arrows and lightning, we stumbled upon a Helm of the Undaunted Hero, and eventually found ourselves gunning down the Vrock while Jont Urner — who was alive in this game — watched helplessly in one of the cages.  After a long and arduous fight, where Janneris' steed shielded Fariq and Janneris from the worst of the Vrock's attacks (targets were assigned randomly, dice gods chose horse), they were finally acquired the map from Jont Urner, who explained that the staff was missing some dragon teeth, which was needed for the party to actually understand and use the map.

- - - - -
Second game involved Fariq again (this time in passive mode, since the player was missing at the time and there were only two players as mentioned earlier), as well as Darren Soulsteel the Loup Garou (a werewolf that didn't need moonlight to transform) and a bard whose name escapes me at the moment (will edit this later to add his name), who was once saved by the Prince of Shadow from being captured by slavers.  The premise of the adventure was drastically different: the bard is a frequent performer at The Fighting Pawn, where one of his clients, a noble who has connections with the Court of Stars, hired him to help with an endeavor linked with Darren: according to Darren's player, there are a number of dangerous artifacts that, when gathered together by the wrong hands, could spell disaster for the world, and it was up to the Mystic's Guild (whose members include the first Elf Queen and the Great Gold Wyrm) to make sure that these artifacts are kept safe.  With this in mind, I explained that the current Elf Queen has learned that one of the artifacts — a crown — had found its way to one of the Lich King's barons who decided to use it for his own personal endeavors against the Lich King.  So it fell upon the PCs to retrieve said artifact, but first they had to figure out how to navigate through the Necropolis.

First stop: Roachdale, a rustic town that was almost devastated during the Great War that inevitably broke out during the 12th Age (caused by the plague that wiped out crops and caused rampant starvation throughout all of the Dragon Empire and beyond).  After a bit of a chit-chat with residences, they eventually got into Jont Urner's room in the tavern (with permission from the innkeeper), where they eventually found sketches and notes pointing at a ruins northwest of Roachdale, as well as a rusted, yet finely crafted ancient elven dagger, which they took.

As they headed to the ruins, they stumbled upon a river-moat of insects... which later turned out to be carnivorous insects as their horses were slowly consumed by the swarm (I wonder how they'll get out of the ruins later on...).  Once they got past that, they found the demon guards who were eventually confused by Darren's sudden declaration (and attempt at intimidation) that he was their new boss.  In the midst of the chaos, Darren threw his chakram at one of them, initiating combat, where Fariq gathered power and used Lightning Fork on the mob, and the bard started firing his arrows.  Darren used his claws, spiked shield and L-shaped sword to hack and slash through the demons until the only one who hesitated to attacked them (a sorry-looking dretch) was left.  There they got a clue as to who the "Big Boss" really was (the demon had on him a feather that he claims was from the Big Boss), took a silver key from him, and knocked him unconscious.

When they entered the maze, the bard was the one responsible for finding a secret passageway in what looked like a dead end, which led them through a shortcut that had a chest in it (which was just where the silver key fit).  In it they got a Chain Armor of Iron Will that was forged by human hands but was endowed with pixie dust to make it light (making it light armor instead of heavy armor); there was even some leftover pixie dust that Darren picked up for use in the future (which caused the pouch to float a lot).  Darren was responsible for helping the group bypass a set of lightning-shooting motes, by throwing stuff that would make the fragile rocks break.

At the center of the living dungeon, Jont Urner lay dead, and eventually a Vrock crashed through the walls and proceeded to attack the party.  Darren's first instinct was to pull out all seven of his throwing knives and fling them all at once at the Vrock, but he failed to pull off this very difficult stunt properly.  Rather than say "he failed to hit", I had a few throwing knives hit (improvised damage halved) and the rest hit the walls which, unfortunately for the group, caused a bunch of undead to wriggle free from the walls that imprisoned them (yes, the entire complex had imprisoned undead for walls [because of his rolls]).Before the Vrock could get at them however, the bard attempted to use the environment against the Vrock, shooting his arrows at the chain links that kept the cages above the ground. 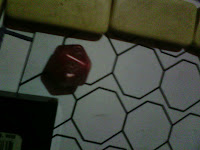 That lucky 19 caused the cages to crash down onto the Vrock, knocking it on the head and stunning it! 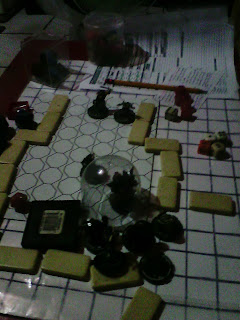 The Vrock was soon mincemeat to blade, claw, lightning and arrows, and while the ghouls were busy feasting on what was once an obstacle and is now a newfound meal, the party tried to get at Jont Urner, and once he was brought out of the cage he was skinned by the bard for the map.

- - - - -
Hopefully this coming session I can run adventures 2 and 3 back-to-back (to catch up with the regular ToT13A schedule) and hopefully I get a proper number of players as well as PCs, because as you can see it's much more interesting to play with more than one player at the table.

The players in both sessions are D&D veterans but only Fariq's player has been properly acquainted with 13th Age prior to ToT13A, so it was a new experience for the second group, who enjoyed everything that the system offered to them.  They've been asking me over at Facebook when the next game would be, and I do plan on running ToT13A with my regular D&D group, fully booking my weekend with mostly 13th Age in mind :)
Posted by Focis Scintilla at 7:21 PM